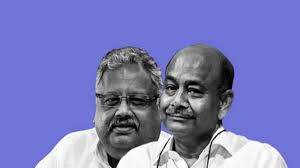 A character whose role was played by Maheswari is Radhakishan Damani in scam 1992. and was a team member of the bear cartel and one of the main followers of the Manu Manek. And presently he is the Second Richest Man of India i.e Mr. RadhaKishan Damani owner of D-Mart.

Mr. Radhakishan Damani was among those people who used to follow the BSE when the Index was around 2000. He followed Manu Manek who was a jor Stock Broker of that Time in 1980’s. Stock market Brokers had a monopoly in the market.

When he was of 32 years he was known as an equity investor because of the starting of his career. As he was connected to the operator of the stock market like

Manu Manek. During the scam 1992, Radhakishan Damani earned a lot of money due to market fall.

In the real world If the securities scam of 1992 would not have been busted then they would have suffered huge losses.

He gained good wealth when the D-mart shares touched the new high in the stock market.

According to Forbes’s latest Richest Indian’s list, RK Damani is the 7th richest person in India.RK Damani with a net worth of over $15.5 Billion.