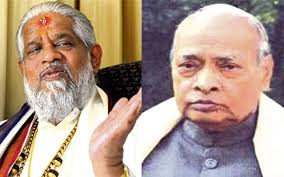 SwamiJi in Scam 1992 is none other then Chandraswami ( Tantrik ) Who was having good hold in politics. Chandraswami was a controversial Indian Tantrik who gained fame when he came in contact with Prime Minister Narasimha Rao. Soon after Rao became Prime Minister in 1991. Swami helped in bring down the Morarji Desai government and was the most important man of P.V Narsimha Rao’s Government.

He took Money from Harshad Mehta for raising the funds in the election but he was a very selfish man and he was also found guilty in many of the scams. Chandra Swamiji used to invest the money of the politicians in the stock market with the help of Harshad Mehta. Chandra Swami was one of the most trusted men of the politicians as he was very close to Prime minister P.V Narasimha Rao. It was very easy for Chandra swami to manipulate the decision of the police and the other officials in that duration because of his political connections.

A recent Web series on Scam 1992. has bought him in light again. Scam 1992 is also known as one of the biggest scams in the history of stock Market .

Swamiji in scam 1992 has done many more crimes.

Chandraswami died of multiple organ failure at Apollo Hospital in New Delhi on 23 May 2017.

Do you Trade in the Equity or Commodity Market and looking for the Right Advisor to guide you. If yes please Don’t forget to fill the form mentioned below.