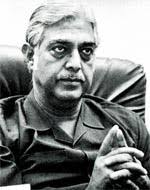 who is Pherwani in scam 1992? Is one of the very popular question nowadays after the release of web series Scam 1992 Pherwani ‘s full name was MJ Pherwani he was chairman of the National housing bank (NHB) he committed suicide because of an allegation during scam 1992 now you can check below the News Which was From Press Trust of India

Bombay, May 21 (PTI) Mr M J Pherwani, who recently
resigned as chairman of the national housing bank (NHB), died
at his residence here early this morning of a heart attack,
family sources said. he was 58.
Mr Pherwani was also the former chairman of unit trust
of India.
the NHB had figured prominently in the controversial
multi-crore stock market scam. Which is being re-investigated
by the CBI.
his survived by his wife, a son, and a daughter.
The funeral was held at the Santa Cruz crematorium
at 1100 hrs.

* PTI report on the cremation

The mortal remains of Mr Pherwani were consigned to
flames this afternoon at the santa cruz crematorium. his son,
Rajesh, performed the last rites.
the NHB executive director, Mr Parthasarthy, chairman of
the housing development finance corporation, Mr H T Parekh,
and chairman of the infrastructure leasing and financial
services ltd., Mr Ravi Parthasarthy, were among those who
attended the funeral.

Bombay, May 21 (PTI) Mr Manohar J Pherwani, considered a
financial wizard, who helped shape the indian stock market but
quit under a cloud as chairman of the national housing bank
(NHB) in the wake of the multi-crore securities scam, died
here today of a massive heart attack.
the death of 58-year old Mr Pherwani, who resigned from
NHB on may 9 owning +moral responsibility+ for NHB’s

Pherwani’s Role in
the securities scam

It is estimated to the tune of rs.2,500 crores,
has come as a shock to many, including the CBI team, which is
probing the scandal.
Mr. Pherwani as chairman of the unit trust of India (UTI)
had played a pivotal role in the growth and buoyancy of the
capital market.
The controversial Pherwani made an exit from UTI from
the chairman’s post following the institution’s alleged role
in the attempted take over of Larsen and Torbo by reliance
through Bob fiscal services along with three other banks in
buying of the shares.
however, Mr Pherwani was credited with playing a
positive role making a contribution to the stock market boom
and his death cast a pall of gloom on the stock market and
financial circles.

Pherwani used to trade in the share market in long term and was also known as an intraday trader of that time. Mr pherwani was a player of share market and made a good amount of capital in share market . Mr. Pherwani also started investing in share market with very little funds and booked huge profits from share market.